In a time where the book, as a material method of disseminating writing for today’s reader, is being brought into question, the work and poems of early 20th century writer Bob Brown have become hauntingly pertinent. His efforts to change the way we read and the curious reading machine he described, but never actually built, are hugely relevant today with the rise of tablet devices and e-readers and the ongoing debate surrounding the future of the book. 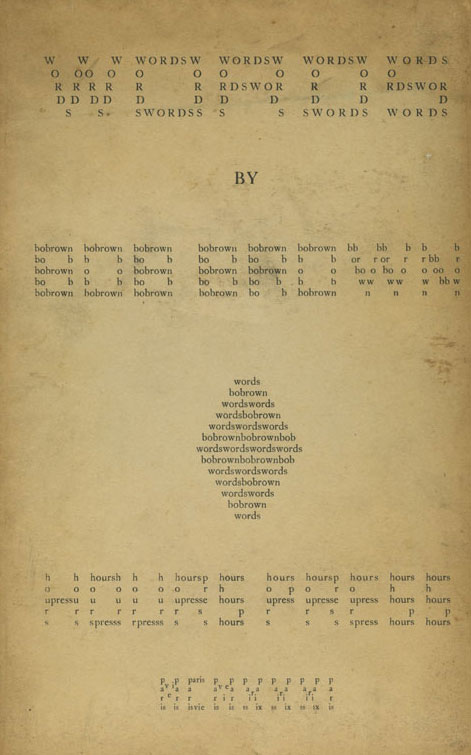 In the early 1930s Brown published three books; The Readies, Words, and Readies for Bob Brown’s Machine. Elements of each of these books were written specifically to be read through his machine. For one reason or another, the published editions of these ‘machine texts‘ were only ever made available in printed books. There is something about this ever faithful print format, writing for an imagined machine, and never quite escaping the page, that is increasingly relevant in current discourses on the future of reading, books and the networked screen.

I request the reader to fix his mental eye for a moment on the ever-present future and contemplate a reading machine which will revitalize his interest in the Optical Art of Writing. (Brown, 1930, p. 27)

Bob Brown, an American avant-garde writer and poet, in 1930 wrote a call for books to escape their binding, text to leave the page behind and for readers to “see words machine-wise” (Brown, 1930, p. 37). He wanted reading and writing to catch up with the rest of the fast paced, future-forward thinking age he lived in and so proposed his reading machine. Although the machine was never fully realised, the legacy lives on, and has recently come to be much discussed in light of the advent of the e-reader. 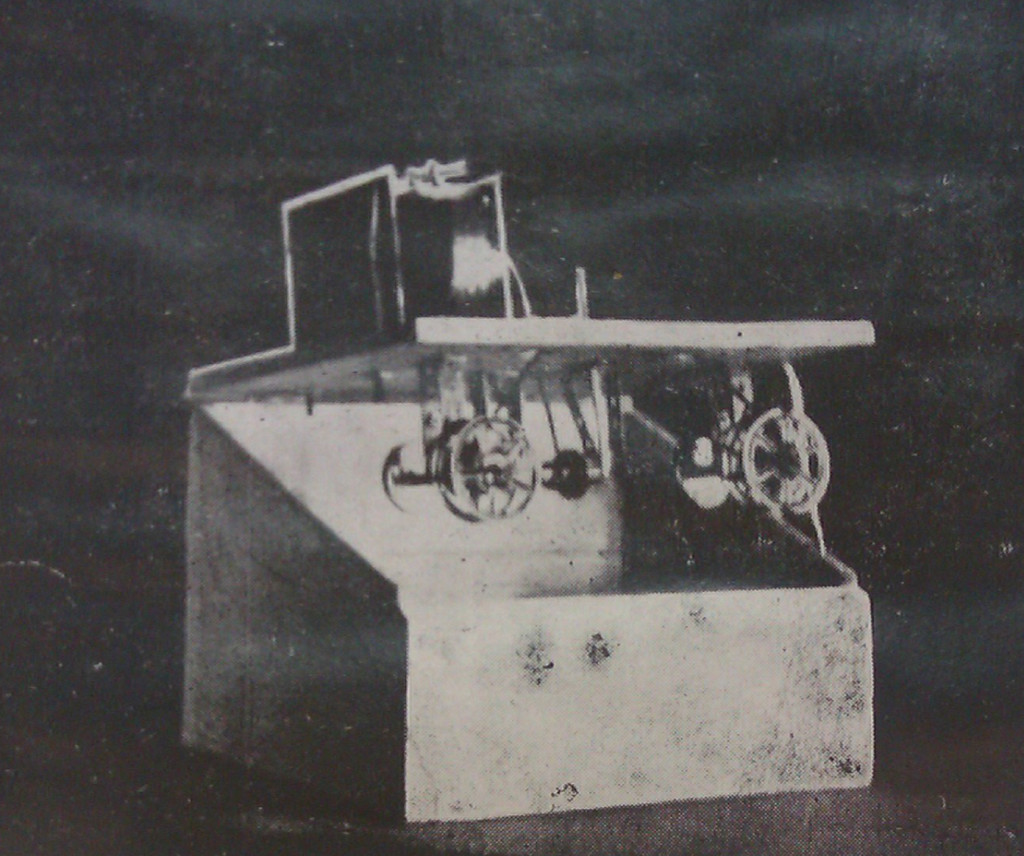 Brown wanted to allow everyone to share in his affinity with words through a new form of reading practice; where “words perhaps eventually will be recorded directly on the palpitating ether.” (Brown, 1930, p.40). The reading machine was first proposed by Brown in a manifesto publication during 1930 simply called The Readies. He described it as “A simple reading machine which I can carry or move around, attach to any old electric light plug and read hundred thousand word novels in ten minutes if I want to, and I want to” (Brown, 1930, p.28). What he was envisaging was a futuristic form of information retrieval; a way of reading that was more optical, and more akin to a projection of text as light beaming onto the eye, rather than the solid printed word that readers eyes had to rove across a paper page to read. While this kind of projected text beam even now seems like a fantastical device that would suit a sci-fi film, it could be not too far from the reality of the way we screen- read today on computers, smart phones and tablets.

The Fiske Machine & the Imagined Escape from the Page

While Brown comes across as being the only one to have thought about reading machines, he was not alone. Admiral Bradley Fiske developed a similar concept called the Fiske Machine in 1926. His machine, which was put into limited production, was a hand held device that you put up to your eye in order to read. The reading material “is produced directly from typewritten manuscript by photography and is so microscopic as to be undecipherable with the naked eye” (The Miami News, 1926, p.1), and loaded into a rack that runs the miniature pamphlet past a magnifying lens.

But book me no books! In the Fiske Machine we still have with us the preposterous page and the fixity of columns. It is stationary, static, antiquated already before it’s acceptance, merely a condensed unbound book. (Brown, 1930, p.34) 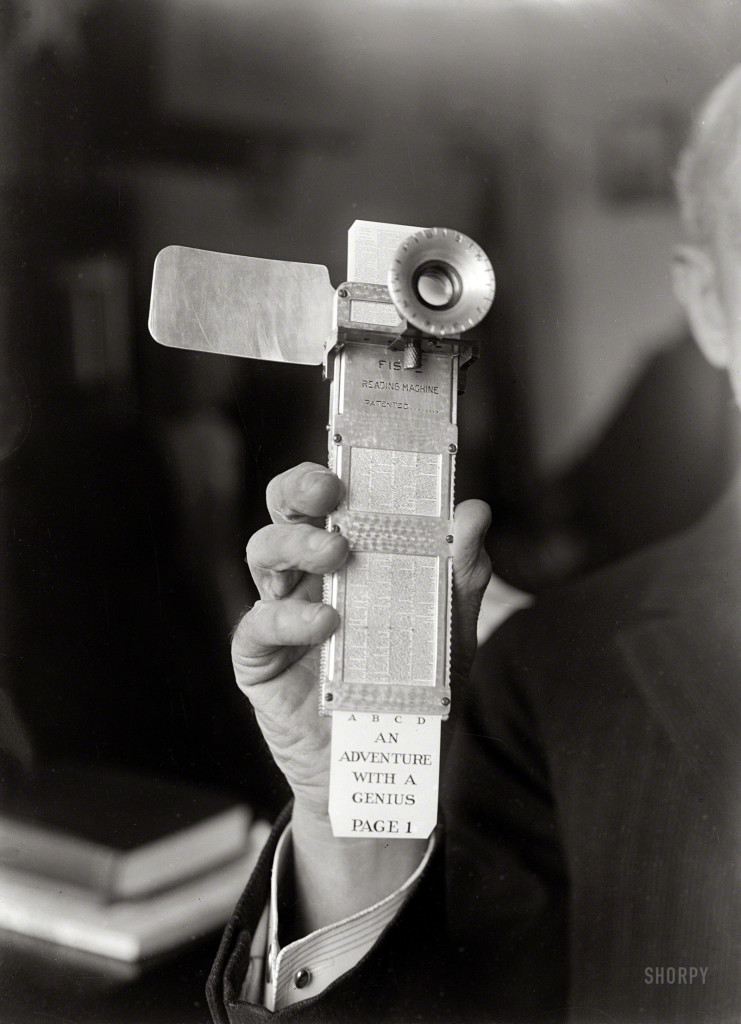 Brown here, while he must have got some inspiration from Fiske’s apparatus, is still clearly dismissing the machine as too bookish. From this statement he could also have been talking about today’s e- readers, with their book-like appearance and the slow and clumsy button pressing, page turning that mimics the paper pages of the physical book. Today, it seems we have not developed much further with escaping the restrictions of the page as Brown or Fiske before him did. As Derrida describes in his book Paper Machine, the written word on computers is ’ethereal’, close to how Brown depicts his desire to beam words directly into the eyes of the reader, skipping the need for paper and book.

The figure of the text ‘processed‘ on a computer is like a phantom to the extent that it is less bodily, more ‘spiritual‘, more ethereal […] but […] the program, the ‘software‘ of machines, still conforms to the spectral model of the book […] they serve it and mimic it. (Derrida, 2005, p.30)

And yet, Derrida is echoing Brown here: the writing machines of Brown’s future (the word processor computer) are even now still chained to the format and function of the printed book.

The Mechanics of the Page as Compromise to Escape

While Brown was trying to communicate his idea for a futuristic reading style he was also working on a prototype of his reading machine; the page would be replaced by a roll of film, (much like microfilm and microfiche – both of which were being developed around the same time). The film would be fed through his machine with light projecting through the film reel to ’beam’ the words to the readers eye. The speed could be controlled, but as far as Brown was concerned, the faster the better. The production of the machine never really got off the ground and there is no evidence that the prototype photographed and printed in Readies for Bob Brown’s Machine has survived. This publication was Brown’s experiment with visual reading as printed text to replace or describe the imagined machine. Readies for Bob Brown’s Machine is a book with many contributions from modernist poets of the 1920s and ‘30s.

The poems were written by the writers to be read on Brown’s machine; and yet, as Hilaire Hiler explains in the preface to the book, the reader is being presented with pages in a book, the very object that Brown and the other poets were trying to escape; so it was effectively a traditionally printed publication with content specifically written for a wholly different type of reading approach. What is interesting is the way that Brown and the poets dealt with this contradiction, or compromise. 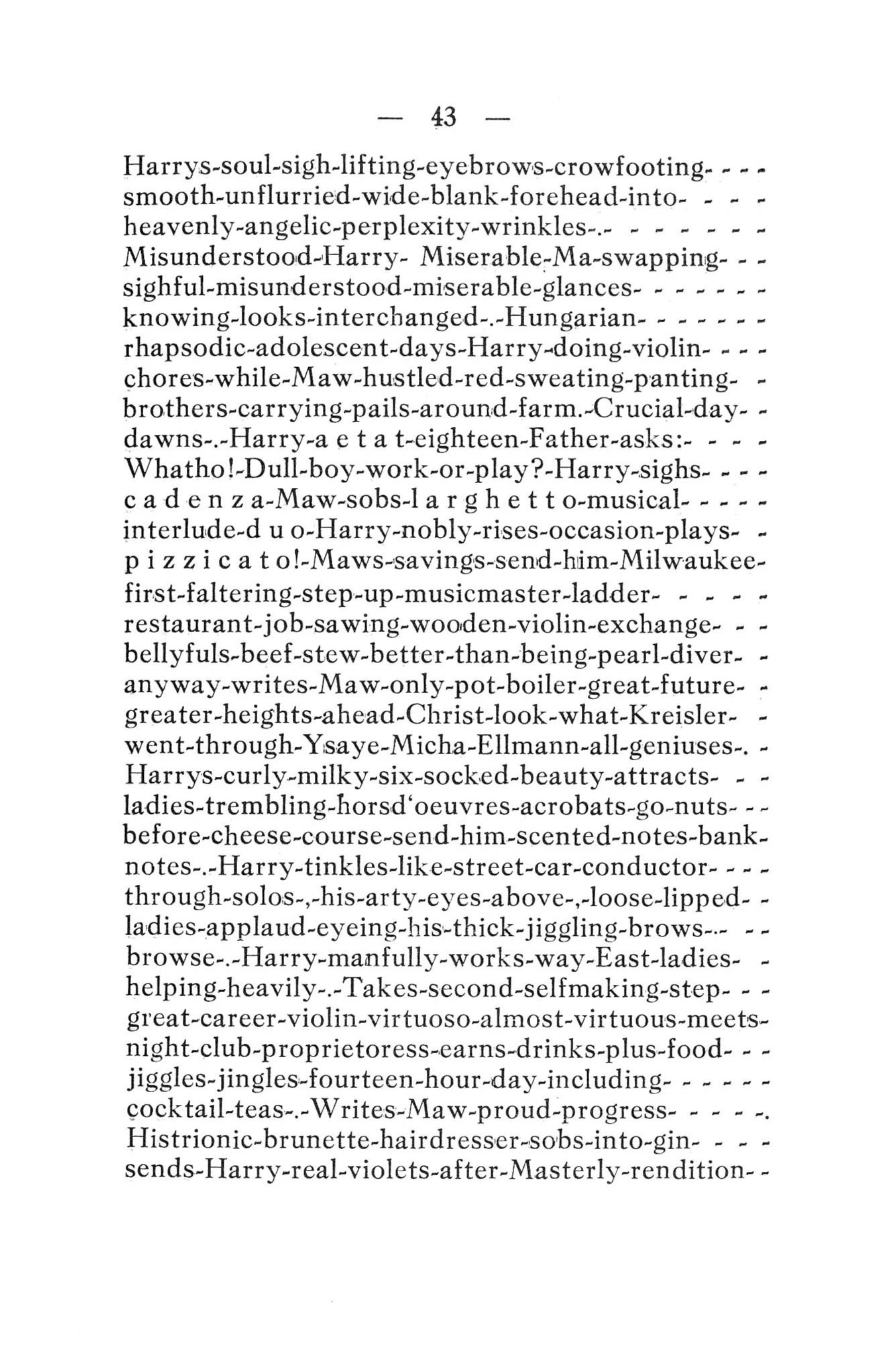 The poet’s use of the em-dash, arrows and other punctuation marks in the readies created a sense of motion, representing imagined movements of a written work in a conceptual machine. Or as Craig Saper puts it in his essay Book-Type-Machine: From Bob Brown’s Reading Machine to Electronic Simulations the “reading becomes more in tune with watching a continuous series of flickering frames become a movie” (Saper, 2009, p.21). You could continue to analogise the way the marks and furniture of the page represent the movement of different technologies, but the underlying idea is the same; the visual elements on the page, including the white space, make a significant impact to the reality of reading; bringing it into the optical world. These visual experiments are not unlike the concrete poetry of the 1950s and ‘60s.

It is very hard to visualise escaping the physical page, but with these visual elements acting as a representation of the machine is the compromise enough? While the attempts of the poets to visualise the reading machine experience through the materiality of the text and page may be a superficial pretence; the way they induce skim/speed- reading could actually be a consequence of the reader engaging with the surface elements of the static page; (much like a computer reads and engages with embedded code); and so becoming the reading machine themselves. It is only when the reader starts to engage with the poet’s visualised text, reading at a faster and faster pace, as they have been instructed, that they lose the authorial voice, loose sight of the ever-present page and begin to read optically. Even with the continued existence of the page, there are concepts contained within Brown’s writing that challenges the page and the way we read; this allows the machine to come alive within the text itself and so within the reader.

The Ever-Present Now of the Page

In writing for the imagined machine, and in using the page and its restrictions Bob Brown was able to envisage his ideas and a new way of reading. Punctuation, page layout and the visual elements of the page were devices used by Brown and the poets involved with The Readies for Bob Brown’s Machine, The Readies, and Words to represent the movement and speed of a new form of reading through an imagined machine. It is evident that through the materiality of the page acting as the imagined machine, that the reader becomes the machine themselves. But is this what it means to ‘escape the page’?

Neither Brown’s, nor Fiske’s machines truly escaped the page, but they embodied the desire for writing and reading to move beyond the printed book, and emerge, as art had done before it, free from such fixed materiality and historical form. In today’s society of the ever-present now, where news, information and constant updates on the state of the world are sent to our eyes, beamed there via screens of various sizes; the page prevails. It is present in almost all our reading, holding writing in. Are we ever going to be rid of it?