Recently, I stumbled upon a Tumblr blog titled Every Item in the Artists’ Books Collection. The collection to which the blog refers is the one located at the The Paul D. Fleck Library & Archives of The Banff Centre (Alberta, Canada), including over 4,000 artists’ books and multiples.

As expressed by its title, the goal of the Tumblr is to keep a photo log documenting the items in the collection that every week are randomly chosen to be shown in a bookcase of the library. Every week, 15 items are selected until all of them will be displayed. The blog is openly inspired by the production of bookworks by artist Edward Ruscha and in particular by his Every Building on the Sunset Strip made in 1966. 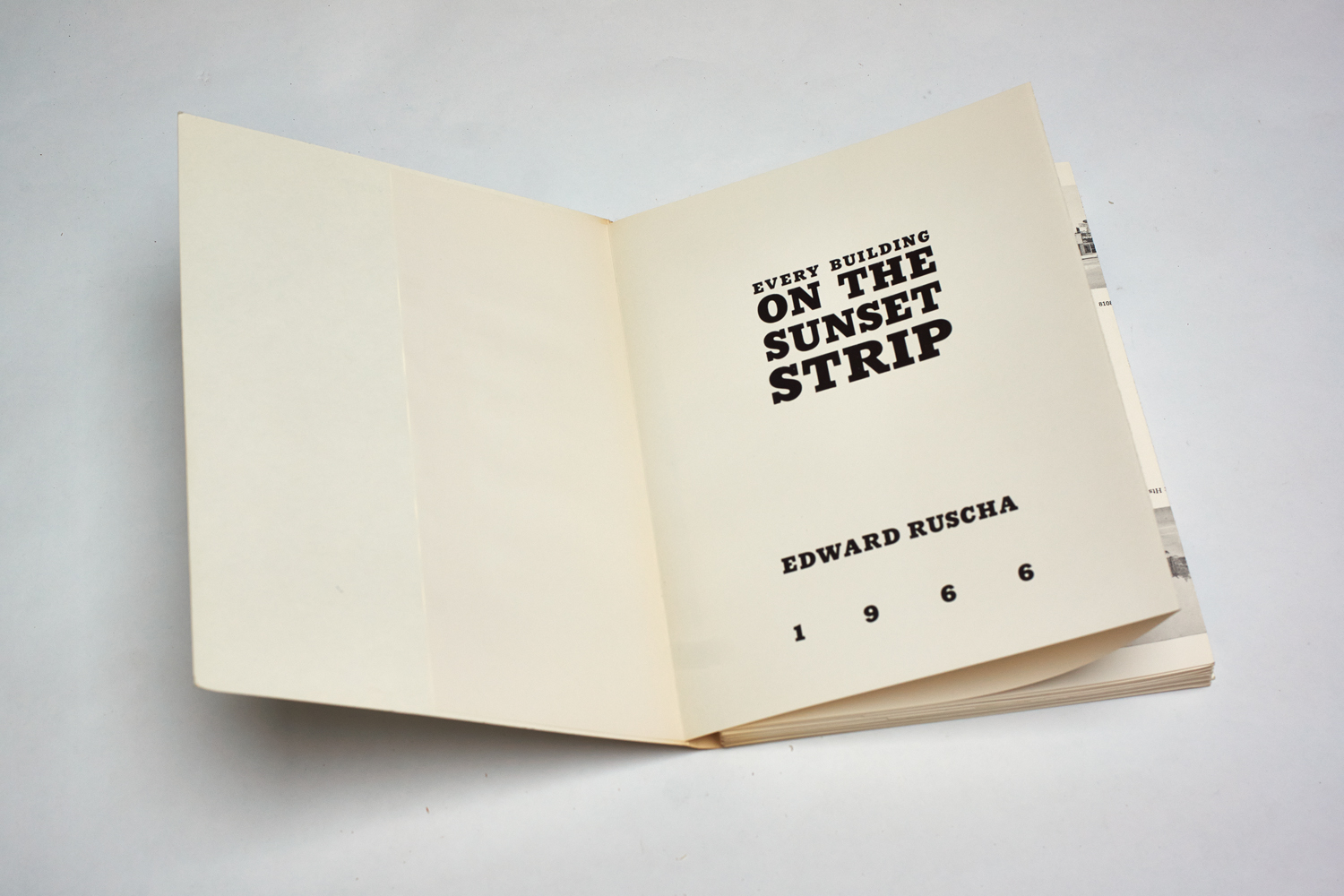 Edward Ruscha, Every Building on the Sunset Strip (1966). Source. 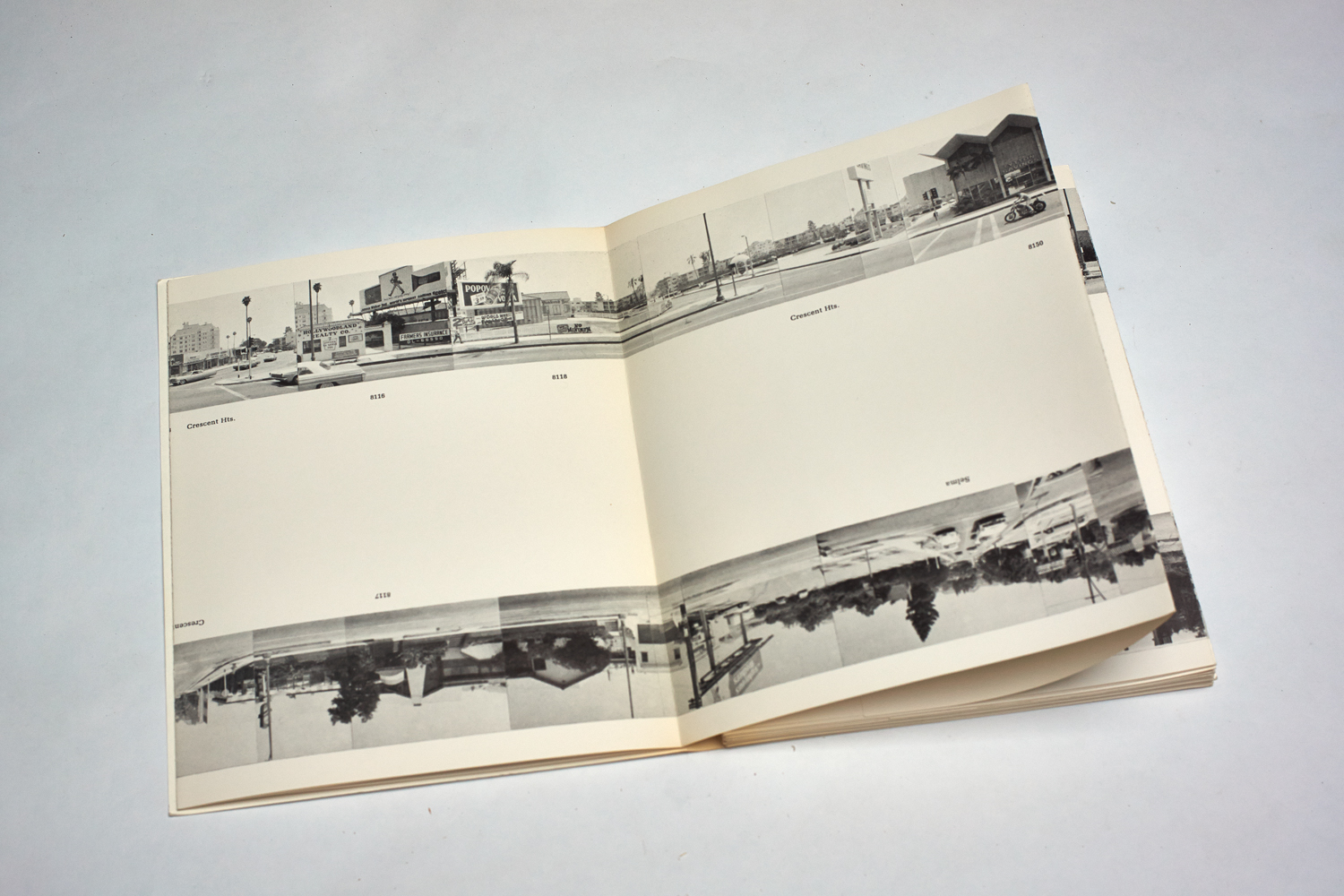 Edward Ruscha, Every Building on the Sunset Strip (1966). Source.

I was fascinated by this performative and informal approach toward the archive and by the engagement with a well-known web platform in order to disseminate what is often locked behind tiring bureaucratic procedures. That’s why I asked a few questions to printmaker and book artist Jaye Fishel, the one who initiated the project. 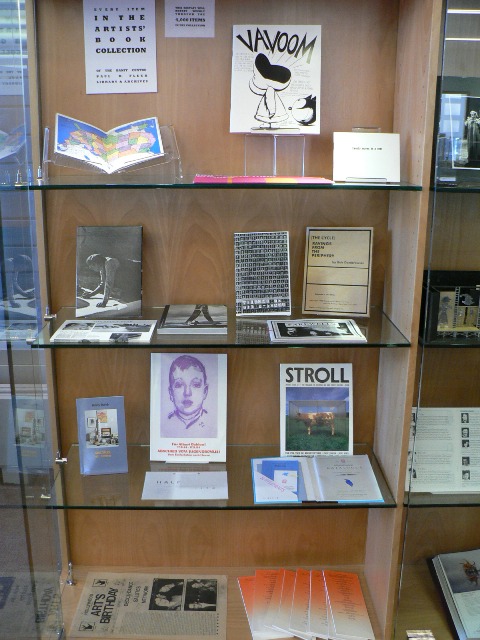 Every Item in the Artists’ Books Collection: Week of January 13, 2014.

Silvio Lorusso: Hi Jaye, can you tell me where the idea came from? Were there some specific needs by the library in terms of promotion?

Jaye Fishel: The idea for the project came out of a desire to get items in the collection out of their restricted shelving, out of their folder housing, and into the minds and hands of users. Several months prior to the inception of the project I began running public programs with the collection in which I would pull a few dozen books, lay them out on a table, and invite the public to interact with the items. It became clear that searching in the catalogue, even with my detailed knowledge of the collection, I was going to miss some gems. So, I had the idea to display and document every item in the collection, to liberate the collection comprehensively by random selection so as to discover items that might otherwise go unnoticed. My feeling is that artists’ books receive little attention across the board because few people have the opportunity to interact with them since they are often stored in restricted shelving for their own protection. I am of the stance that it is folly to staunchly protect something that is meant to be held in hand and explored up close. I think we need to create more opportunities to liberate artists’ books for a wider range of people to discover and appreciate. After all, they might be the most portable, accessible art form.

As far as promotion, I sent the Tumblr to the Art Libraries Society listserv, and to colleagues. The wonderful thing about Tumblr is that posts are shared and therefore generate new followers. I hoped that the cascading function of Tumblr would in time naturally grow the audience. 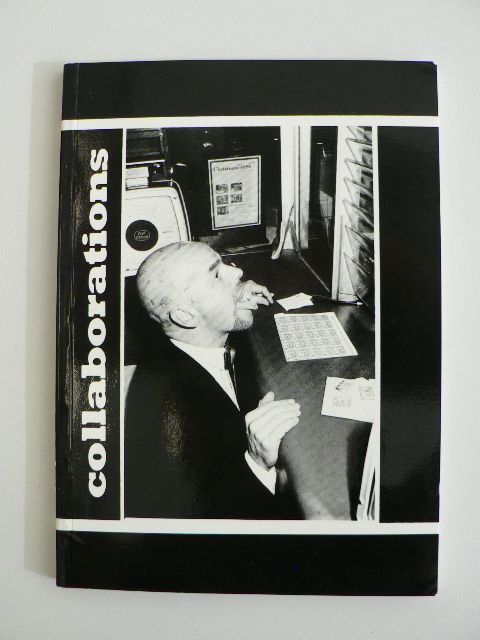 SL: The Tumblr blog becomes a way to perform the archive, and it could even be seen as an art piece. Moreover it clearly refers to the work of Ed Ruscha, also by mimicking his books’ visual style. How do you frame the action of documenting the books on a web platform?

JF: The project is very self conscious of its ties to Ruscha, who I think might have had a Tumblr in lieu of making books had he started in 2006 instead of 1966. The books will never give themselves away fully on the Tumblr. We only post at most three images per book, which hardly reveals the larger look and feel of the item. The books are documented in a way to get them out of their boxes and out into the world, to further the function of the display case that is only viewable in Banff. 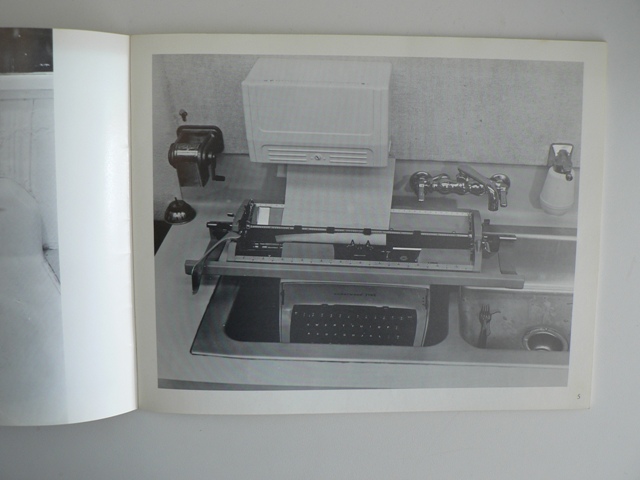 SL: Why did you choose Tumblr? Did you consider other possible platforms?

JF: I chose Tumblr because it is free and because of the community aspect of reblogging and liking posts. I wanted the project to spread on its own momentum, which is how Tumblr functions. No other platforms were considered. 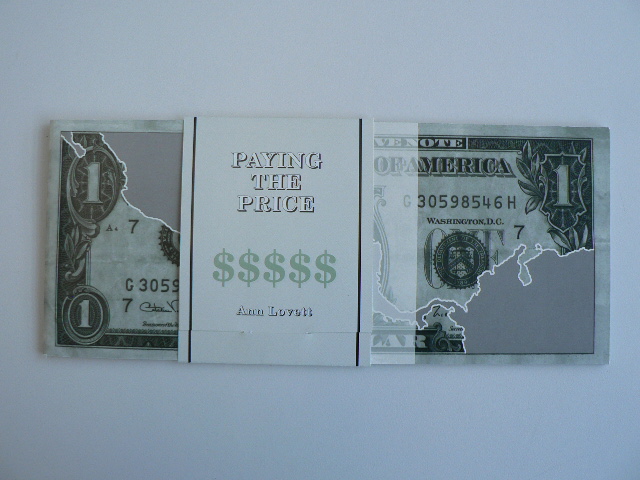 SL: What kind of response do you expect from this initiative?

JF: I have little expectation of a marked response from this project besides growing more Tumblr followers. I imagine that there are book enthusiasts out there, checking out the blog regularly without “liking” posts, which is a function of the impersonal internet. I hope that the blog inspires or interests people but I don’t necessarily expect this to come in any measurable response. 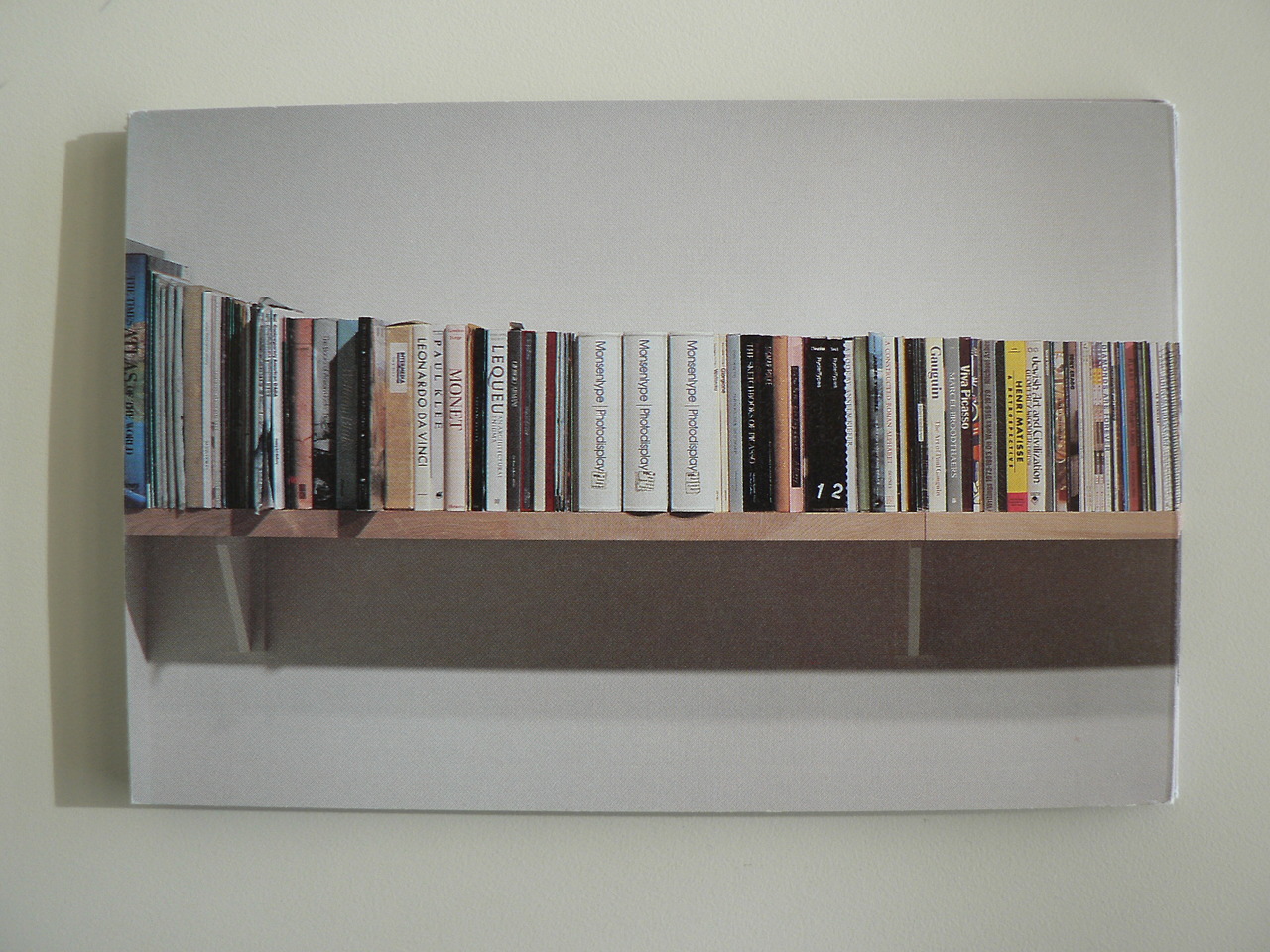 SL: While the collection counts 4000 items, only 15 are displayed every week. The whole operation will therefore take roughly 5 years to complete. How do you manage such commitment? Aren’t you afraid that Tumblr will become obsolete by then?

JF: I’m in fact no longer managing the project directly since I recently left Banff at the end of my contract. But, the project is fairly simple to execute and will continue to be run by Banff Centre library staff. I’m not terribly worried about the longevity of Tumblr. The library will have all of the documented images on a hard drive, so no matter what happens to Tumblr, there will be a visual record of the entire collection that could be shared in any number of ways. 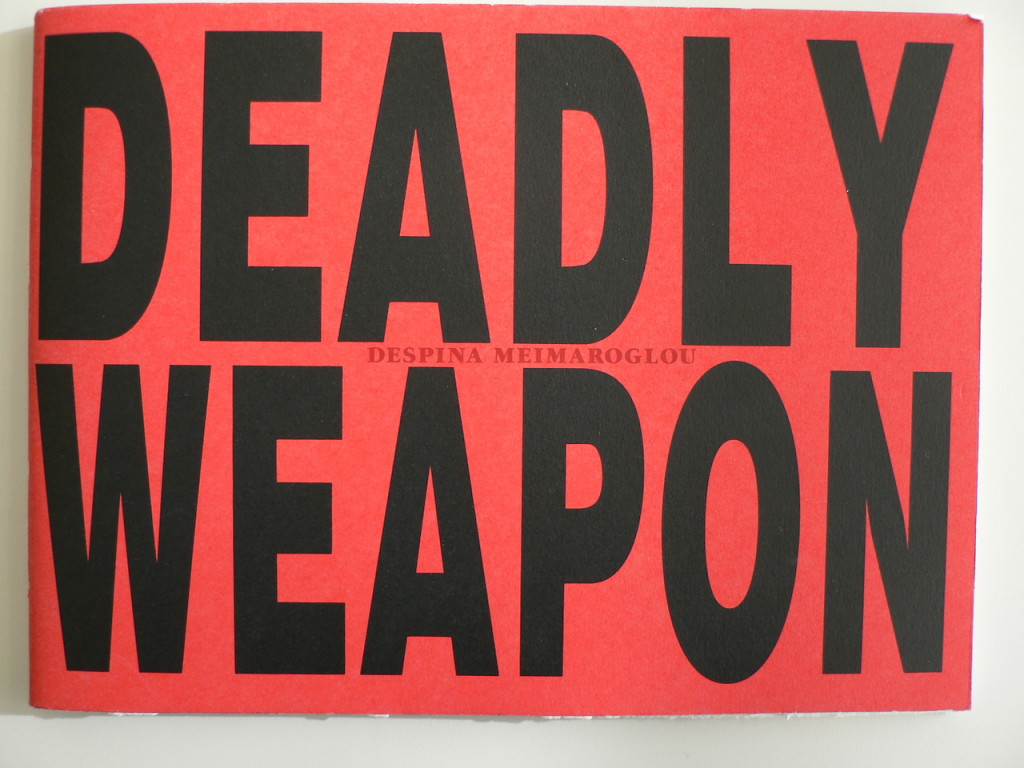 SL: The Web seems to provide a prolific space of interaction for makers of books and zines. As a book artist yourself, do you confirm this feeling? What is the role of the internet in relation to your production of books?

JF: Without the Web I would not know about many books and book events, but I mainly interact with makers and their works at book and zine fairs. It seems a common thread among book people that we like the feel of books in our hands, not just on the screen. The internet has very little influence or relationship to the work I make, although I foresee in the future that I may publish more PDF print on demand type books. For now, I’m all paper and ink. 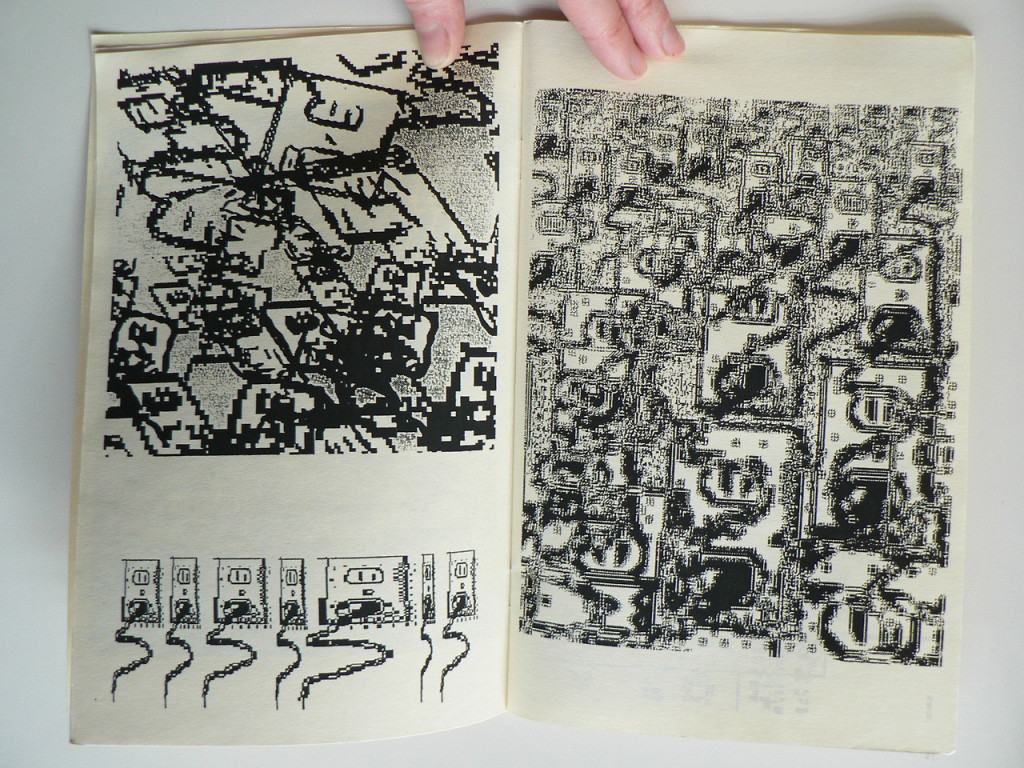 One Response to “Every Item in the Artists’ Books Collection: Interview with Jaye Fishel”