[Originally published on the Institute of Network Cultures’ Out of Ink blog.] 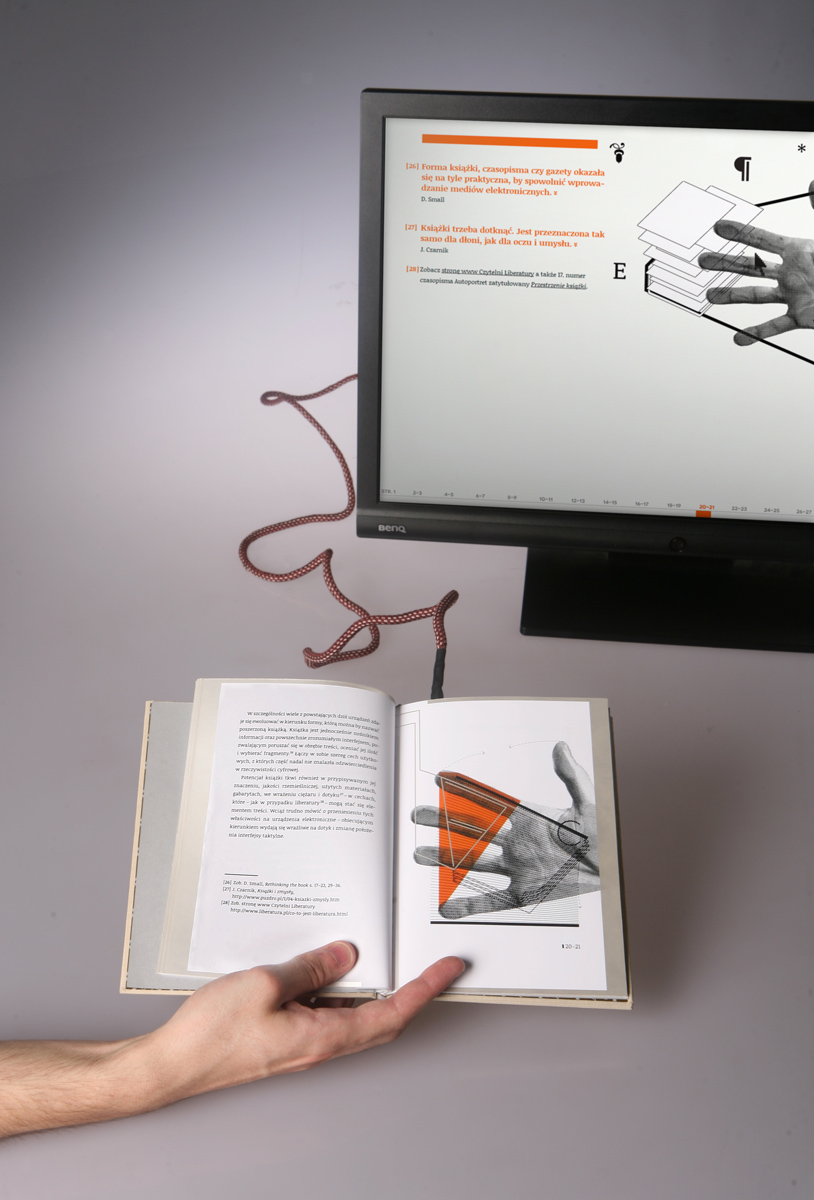 Francesca Coluzzi: Can you introduce yourself? What is your background and what you are doing now?

Waldemar Węgrzyn: My name is Waldemar Węgrzyn and I’m a graphic designer from Katowice, Poland. This year I graduated from the Academy of Fine Arts of Katowice in the department of design. My fields of interest are book design, typography and also multimedia experiments with interfaces.

Now I’m trying to initiate a startup, that may be ready to be launched in January, connected with book design and graphic design with additional experiments such as the Electrolibrary project.

FC: Can you tell me about Elektrobiblioteka? How does it work?

WW: The Electrolibrary is my diploma project that I completed in the Academy of Fine Arts of Katowice. It mixes the traditional paper book with a digital interface. The physical book can be connected to the computer via USB cable. By turning the pages, the user can navigate the project’s website. While reading, the user gets access to additional information such as quotations, hyperlinks or Youtube movies – things that can’t be embedded in a traditional book.

The title of the project is a reference to the El Lissitzky manifesto Topography of Typography. It seems that in the 1920s El Lissitzky predicted that electronic libraries would replace the paper ones. The contents of the book are actually my diploma thesis regarding the book as a kind of interface. Unfortunately for now it’s only available in Polish but maybe I will translate it to English.

FC: Can we call the Electrolibrary a digital book?

WW: We can call it both a digital and a non-digital, or analogue, book because the project consists of two parts: a printed book (in fact it has some electronics inside, but it’s similar to traditional book) and the website. Both parts are complete and independent publications so that you can read the book and the website like you would normally. They are complementary, so by putting them together you create a new type of publication that is different and more specific. The book is an interface for the contents that can also be used to navigate the website and to communicate with the computer.

FC: What have been the parameters, limits and rules in its design?

WW: The project was a big experiment for me and it was about mixing my fields of interests, especially print and digital design.

Since the beginning it wasn’t my intention to design some new and useful solution for an interface that would be, for example, comparable to e-books. Nevertheless Elektrobiblioteka is often described as a DIY e-book. Instead, what was really interesting to me was to combine these two forms of media and look at the connections, which I think is meaningful in and of itself.

It was interesting to me to consider the book as an example of a text-based interface, that you can compare to older ones but also newer ones. In this sense Lev Manovich’s thoughts on media in the book The Language Of New Media were very inspiring to me.

I also think that the mechanical aspect of the book – its spreads, numbered pages, spine, etc. – is very interesting in comparison to the website’s interface, because you can treat the space of the book in similar ways to the space of a website.

FC: What were your main goals and did you reach all of them? Are you still working on it?

WW: If the goal was to connect the book to the computer, then yes, it worked. But the most interesting thing is what is opened up by the project: I’m currently investigating the possibility to use such a device for children books or maybe artists’ books, so to employ it in more complicated projects than my own. Of course I’ll have first to solve some technical problems that were not very relevant at the time, but that are now. For example the book has to be printable in bigger editions. There are some very strict parameters.

The elements connected to the physical production of the book, like the size of the book, the binding, etc. are particularly difficult. The paper book has to be flexible and it’s difficult to provide an electrical connection between the pages at the same time.

FC: Did the feedback from users give you further inspiration to improve the project?

WW: Yes, I tried to observe the readers, especially during some exhibitions or presentations of the Electrolibrary, and of course I also spoke to them. You know, it’s not like with regular books that most readers read from the cover to the end. On the contrary they play with it like with some kind of funny new device.