I began to be interested in Print on demand (POD) while I was doing an internship at the Institute of Network Cultures in Amsterdam. The INC, founded in 2004 and directed by media theorist Geert Lovink, is a research centre that “analyses and shapes the terrain of network cultures through events, publications, and online dialogue”. Generally, INC’s publications can be read online, downloaded, and even ordered as physical books for free. As a consequence, it sometimes happens that these free books are then sold for a price elsewhere. However, people at the INC do not complain. What they care about is the dissemination and circulation of ideas, so they are enthralled by the unexpected ways in which content is redistributed and reframed. 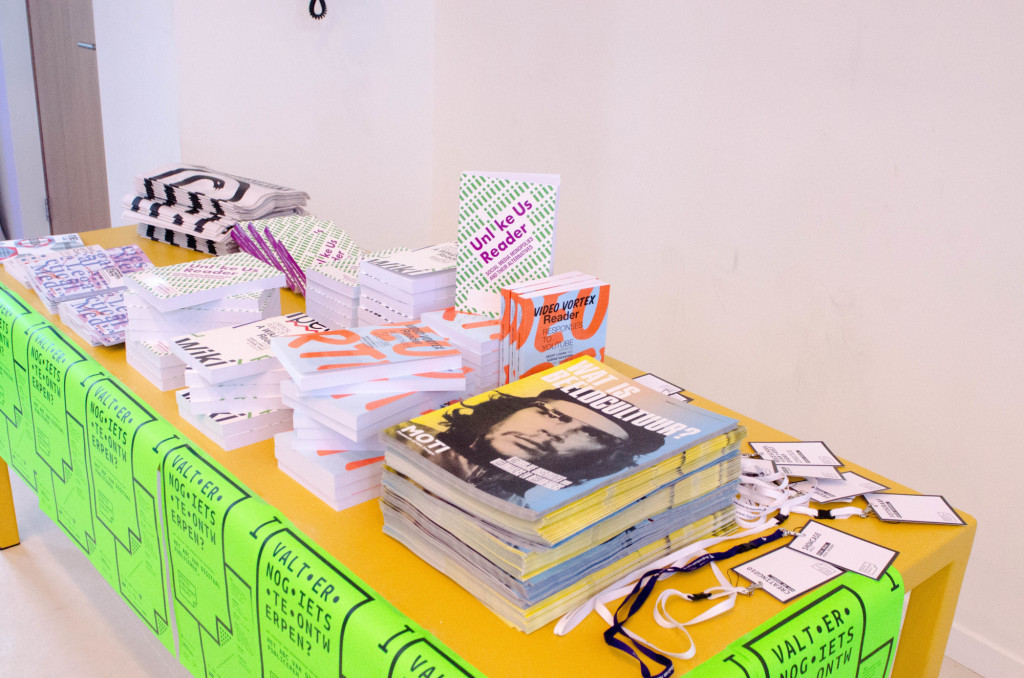 This was the attitude that guided my research on POD. I discovered that Print on Demand is a system that allows even just a single copy of a book to be printed and made commercially available without any prior investment. This sounded revolutionary. As an intern, one of my tasks was to explore different POD platforms such as Lulu, surely one of the most well-known and probably the most appropriate for text-driven research publications. I also had the chance to try out the Espresso Book Machine, a complex apparatus with transparent frames through which one can see the process of getting a book printed and bound in about 15 minutes.

At first, I was disappointed by the quality of POD services. For instance, I found Lulu’s user interface – which was recently redesigned – cumbersome, both for the publisher and the purchaser. While the ultra-reflective covers of their paperbacks are quite tacky, the promised “perfect binding” breaks after the books are opened a few times. Furthermore, as a graphic designer I felt that POD was too limiting: the possible choice often consists of a couple of different papers and a few standard formats.

But after some time, I started appreciating such humble but distinctive physicality: I think I can easily spot books printed with Lulu. To me, their peculiar identity became appealing as much as cheap xeroxed zines. It’s no coincidence that Xerox played a crucial role in the development of POD systems, both in technical and cultural terms. While it combined the functional components that make POD possible, it also supported experimental projects that employed it. In 2007, the Italian branch of the company promoted the realisation of Tristano, an early example of a generative novel by Nanni Balestrini, first published in 1966 but fully realised only four decades after, when it was finally possible to print and bind unique permutations of the text. In Umberto Eco’s words:

[…] nowadays, not only with the computer able to rapidly combine in the most dizzying ways, but with digital printing and Print on demand, the reader can have “in the flesh” a copy of the story different from all the others (which represents at the same time the triumph and death of the numbered edition, as each copy should be the number I), or have XXXX copies to compare them (given enough time). (Balestrini, 2007, p. X) 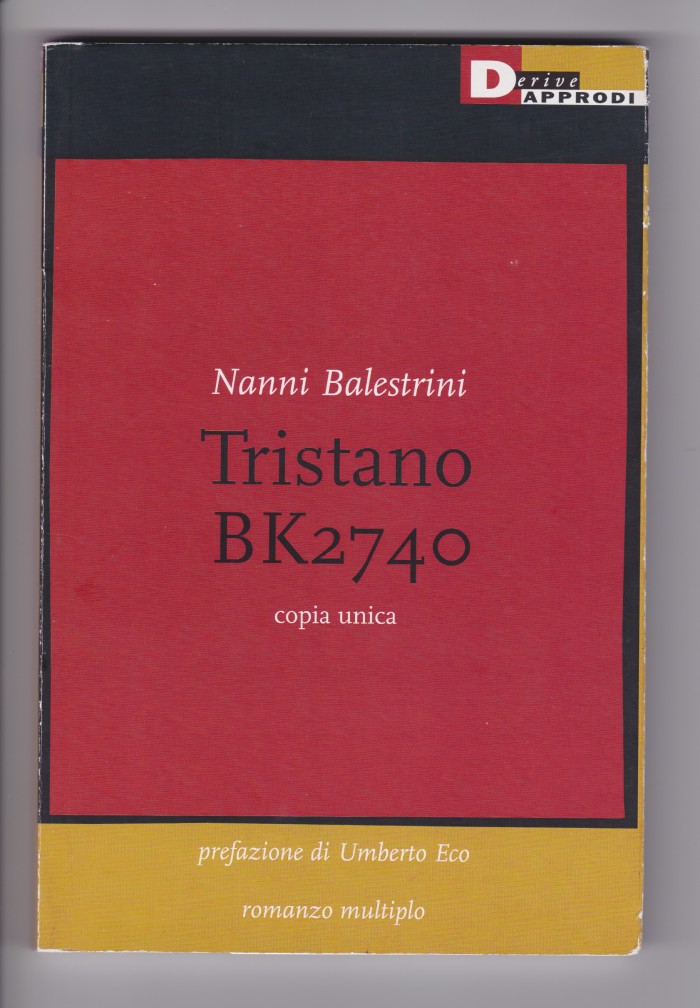 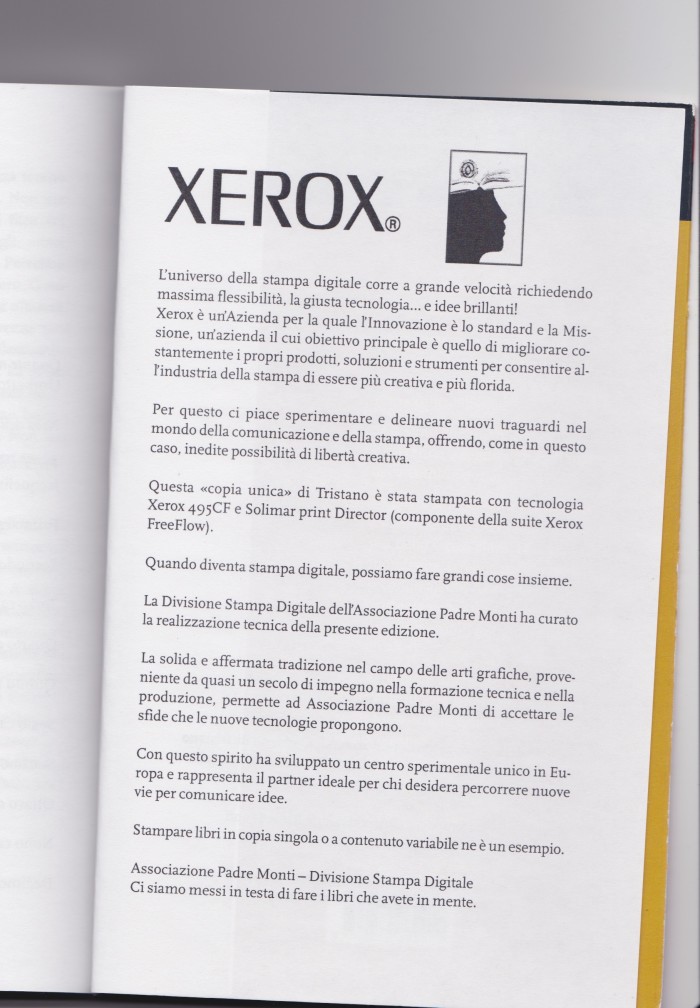 It’s fascinating to think of POD’s materiality as a compromise among the technical infrastructure, users’ needs, and the economic constraints of both the publishing industry and e-commerce. This is well exemplified by Post-Fordism and its Discontents, a book that exists in four versions and which design – by Nina Støttrup Larsen and Žiga Testen – epitomises its production and distribution processes. Its cover becomes a space to acknowledge the different editions, as well as their prices and print runs. 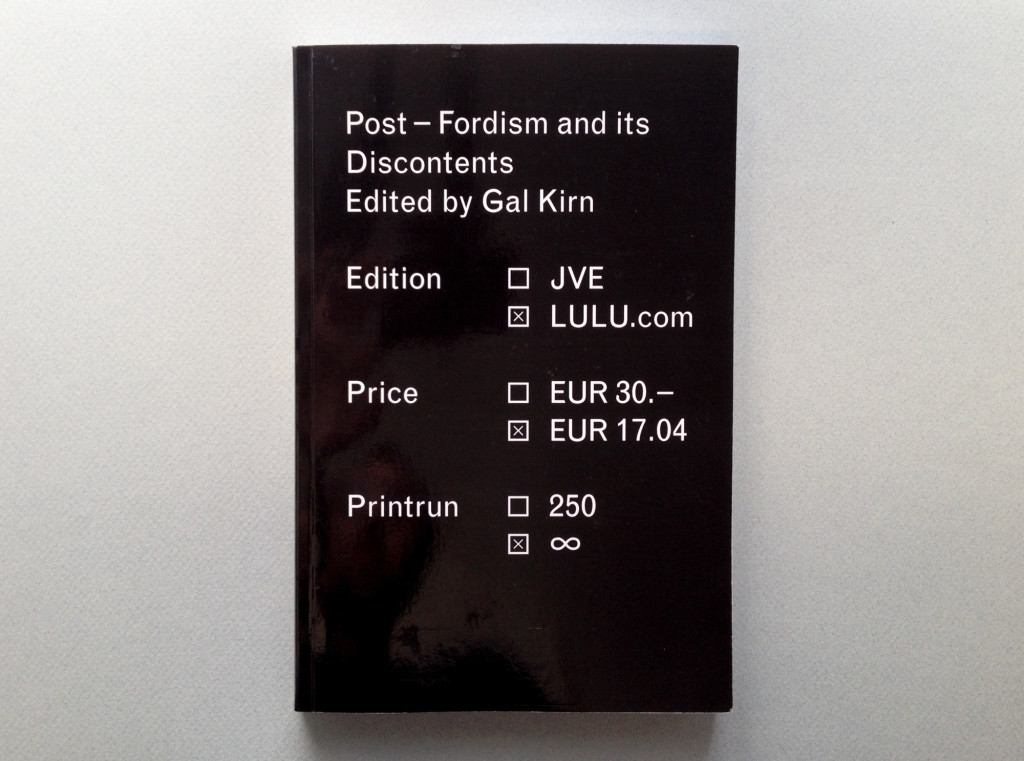 Post-Fordism and Its Discontents, edited by Gal Kirn, 2010.

In this sense, POD books represent a genuine hybrid of digital and analog processes: under the guise of the “traditional” book form, there is a complex ecosystem made of file formats, metadata, retail platforms, multiple connections to online stores and, sometimes, even YouTube book trailers, authors’ blogs, etc. Sent through the regular postal system, the physical book is the tip of the iceberg of an infrastructure that takes advantage of digital printing, desktop publishing, PDF format, and Web 2.0. Therefore, POD is not a new technology in itself, but a fruitful combination of existing ones. 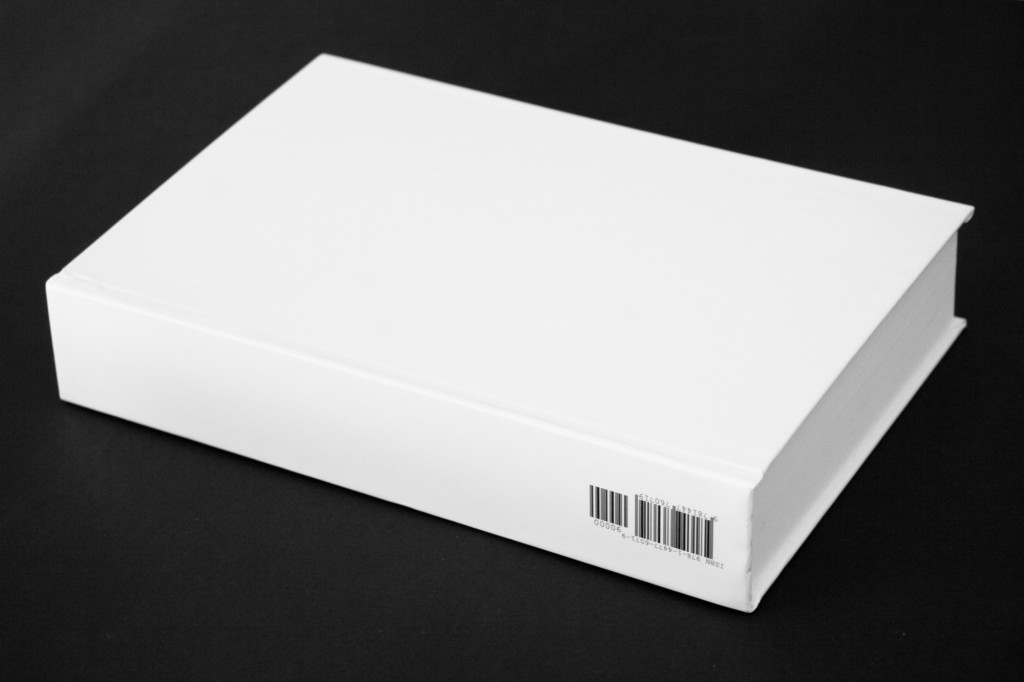 In 2011, researcher Giulia Ciliberto and I developed Blank on Demand, a project that adopted the physical book as a unit of measure of a whole POD production and distribution process. It consists of two volumes printed with Lulu, whose formats correspond respectively to the maximum and minimum dimensions currently available. Similarly, page amount and price are set according to the limit values allowed by the platform. The two books are completely blank, except for the presence of the ISBN code. Deprived of any content, they reflect the influence of the current technological context on their materiality. We were particularly fascinated by the idea of paper sheets going through all the complex print machinery without any purpose. 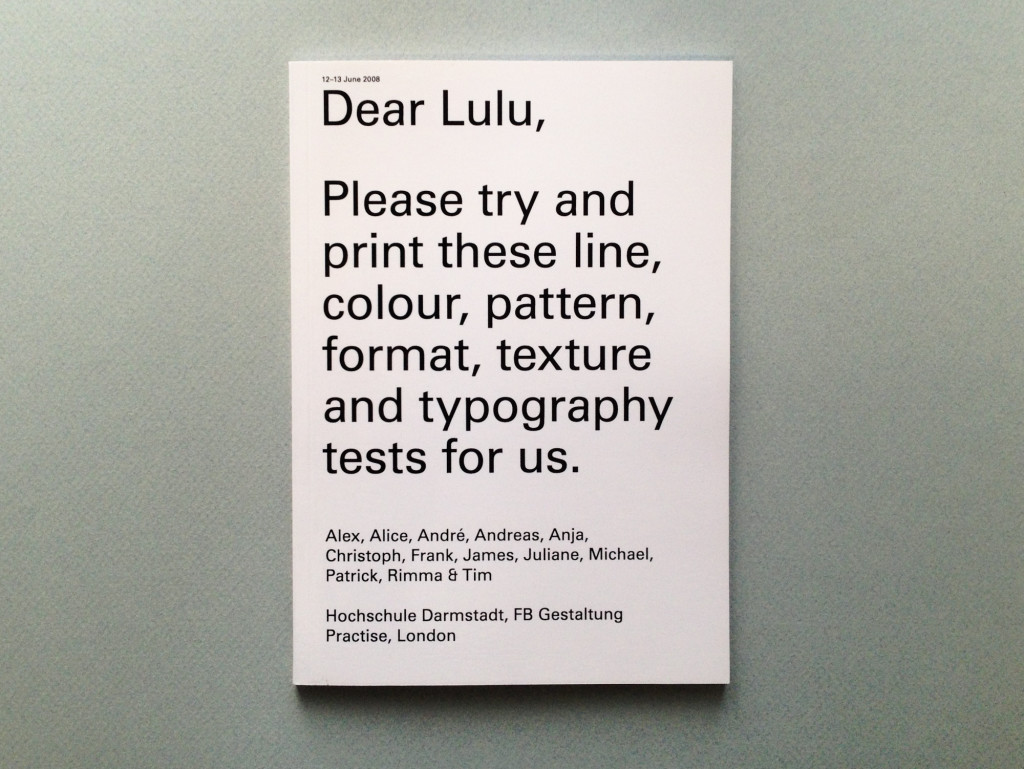 This isn’t the only project aimed at testing POD platforms and experimenting with them. Dear Lulu, a book meant to calibrate various graphic parameters such as patterns, colours, and typography, is the result of a workshop run by James Goggin in 2008 at the University of Applied Sciences in Darmstadt. The procedure was afterwards extended to other platforms, such as Blurb and MagCloud. Variable Format is a manifold project conceived in 2012 by Lynn Harris, published by AND and designed by Åbäke with Pierre Pautler. Materials collected from the now closed library of the Byam Shaw School of Art form the content of a publication that is spread through twelve POD platforms. Instead of being resized to fit the various formats, a single layout is cut, so each printed artefact acts as a unique “framing” of the same source. Finally, The Black Book by Jean Keller: made in 2013, it takes the value of books in a literal sense, drawing from the premise that printer ink is one of the most expensive substances in the world. 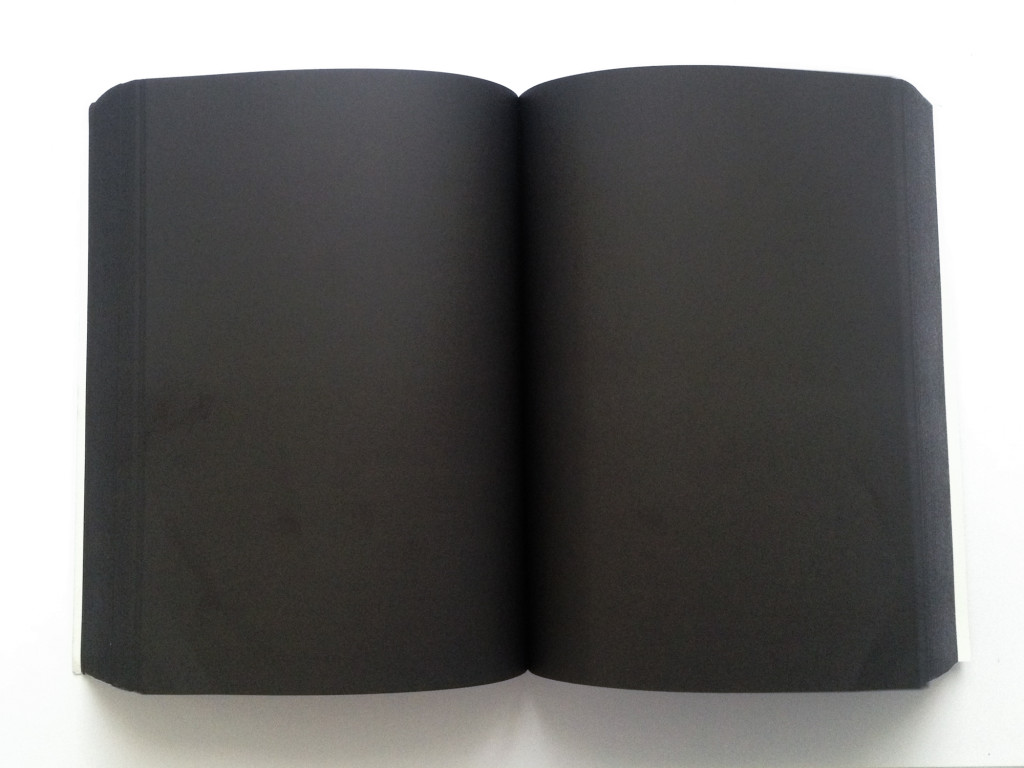 As these bookworks represent, to use Johanna Drucker’s words (2004, p. 161), a “self-conscious record of [their] own production”, it is fair to ask in which ways POD informs the field of artists’ books and connects to its legacy. Comprising very diverse artefacts, the context of artists’ books is an intricate one: from inconspicuous conceptual paperbacks to crafty, sculptural book-objects. Probably, it is this latter embodiment that leads to a prejudice towards POD artists’ books, rarely found at fairs or exhibitions. An anectodal proof of this preconception is a recent call to which the eligibles are ”any artist bookworks other than SPOD (Self Published On Demand such as Lulu, Blurb and so forth).” (Artists’ Book Cornucopia VI, 2014)

Instead of failing to fit some dubious criteria, I argue that POD reinforces the inheritance of the artist’s book as a democratic multiple. From a material perspective, I think of some of Ed Ruscha’s bookworks, playing with the evenness and anonymity of mass production in order to provoke a mild shock, “a kind of a huh?” in his own words (Ruscha, 1973). Such evenness is a defining feature of POD systems: in order to produce unique copies, paradoxically, they enforce the limitations of mass production by applying stricter standards. From an ideological perspective as well, POD seems to extend the democratic impulse professed by several artists working with books. In 1976, Sol LeWitt published the following text on Art-Rite:

Artists’ books are, like any other medium, a means of conveying art ideas from the artist to the viewer/reader. Unlike most other media they are available to all at a low cost. They do not need a special place to be seen. They are not valuable except for the ideas they contain. They contain the material in a sequence which is determined by the artist. (The reader/viewer can read the material in any order but the artist presents it as s/he thinks it should be). Art shows come and go but books stay around for years. They are works themselves, not reproductions of works. Books are the best medium for many artists working today. The material seen on the walls of galleries in many cases cannot be easily read/seen on walls but can be more easily read at home under less intimidating conditions. It is the desire of artists that their ideas be understood by as many people as possible. Books make it easier to accomplish this. (LeWitt, 1976)

This democratic impulse was quickly subsumed and partly extinguished by the dynamics of the art system: let’s consider for instance the price of old Art-Rite issues, originally set to $1, which is currently around 100$ on eBay. In contrast, POD seems to foster a more profound proclivity to “convey art ideas […] to all at a low cost”. When using POD, several artists enable the online preview of the whole book or make the PDF of the publication available for free, which, as Alessandro Ludovico (2014) points out, can be seen as a sort of sub-medium, as it evolves from a production standard to a standalone one.

In turn, the physical book seems to represent almost an incentive to distribute ideas in a digital environment, while its photographic documentation is a means to establish the publishing act. In fact, as poet Kenneth Goldsmith (2013) notices, experimental POD publications are sold – if ever sold – in extremely small amounts. Furthermore, their price is often set to the minimum, which means that the artist doesn’t get any money – an aspect that raises legitimate concerns about the sustainability of such practice.

Artists who employ POD are often very conscious of its effects and implications. The Artists’ Books Cooperative (ABC), founded in 2009 and consisting of several members located all over the world, declares:

Print-on-demand liberates artists from the oppressively expensive and laborious demands of traditional photobook publishing. Print-on-demand is fast, cheap, and light. It exists outside the power structures of publishers and distributors. […] We’re interested in raw ideas and there is no better transporter for a great idea than a book. A single book if needs be. And with the internet, the ideas in that single book can go viral and reach millions in a split second. (ABC, 2014)

Borrowing from German philosopher Ernst Cassirer, media theorist Florian Cramer (2013) suggests to consider the book as a “symbolic form”, since it is able to transcend diverse media and supports. ABC’s work echoes, and even extends, such perspective:

We’re all involved in publishing the idea of a book online. That is to say, each of our artists presents their book in some form of digital format that exists online as well as in physical form. That doesn’t mean it has to be an e-book. It could be the book presented as a video trailer on Vimeo, as a single line of text, a performance documented, an essay, a series of stills, or as a downloadable pdf file. The book exists in physical form and in conceptual form. It travels further and quicker as an idea than as an object. (ABC, 2014)

ABC member Paul Soulellis is the curator of the Library of the Printed Web, initiated in 2013. It includes publications in which content from the Web is transposed to print in ways that are often surprising (the library contains postcards, newspapers, zines). Many of these are POD books. In my opinion, this “archive devoted to archives” (Soulellis, 2013) highlights the radical potential of POD: with a few clicks and a fair amount of money, a good part of Soulellis’ collection can be physically reconstituted somewhere else, while its digital incarnation circulates online as multiform embodiments of art ideas.