During the month of November I had the honour and pleasure to do a residency at Constant Variable (Brussels): a [house] «for artists, designer, techno-inventors, data-activists, cyber feminists, interactive-geeks, textile-hackers, video-makers, sound-lovers, beat-makers and other digital creators who are interested in using Free Libre Open Source Software for their creative experiments». Among other things, I’ve been working on P—DPA through mutual exchange with the people around on both theoretical and practical level. Here is a short report of this enriching experience.

“Our Paper Is Digital“

I was happy to present P-DPA in a context in which the focus on “traditional” graphic design is coupled with the development of Epub books. I hope that my research represented to some extent a perspective able to bridge the multiverses of print and digital technology. I like to believe that to highlight the obvious fact that most printed artefacts nowadays derive from fully-digital processes is already an effective way to overcome the usual dichotomies that haunts the understanding of book publishing.

I also took the chance to give some insights on the manifold role of the contemporary designer, who is not only subservient to the needs of the industry, but he can also focus on the analysis of the mutations of technology and its impact on behaviour and social relationships through actual projects or prototypes. In this sense the role of schools, laboratories and cultural institutions become strategically crucial. 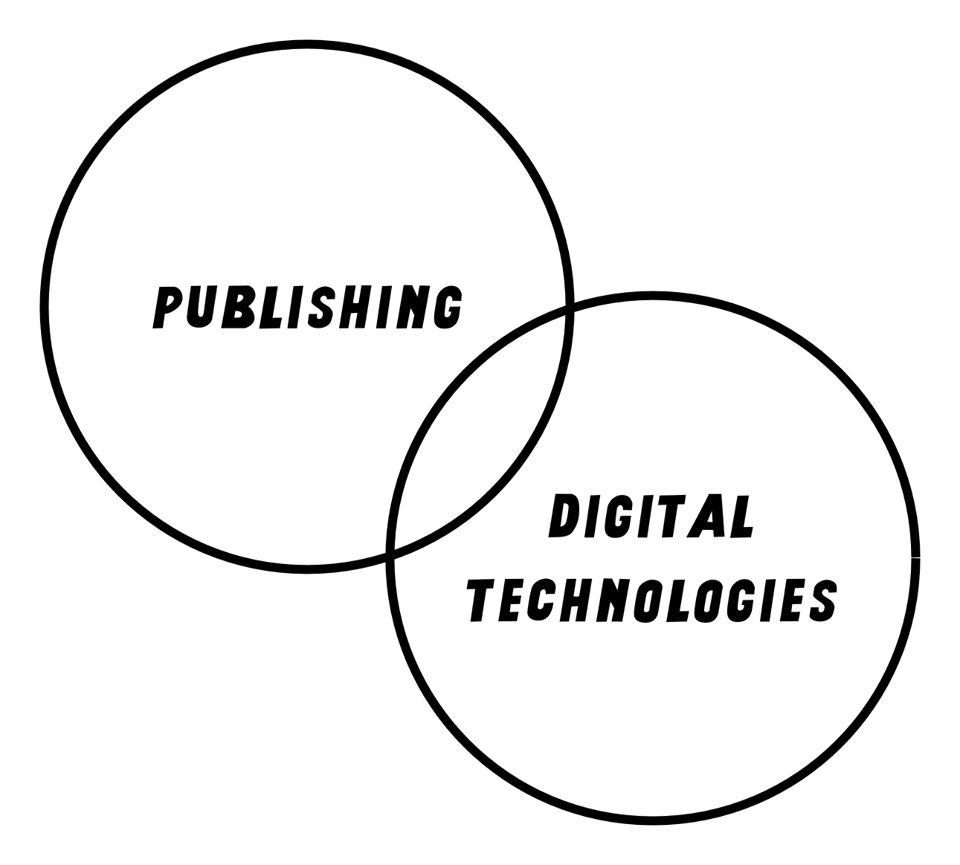 As a continuation of the discussion, Loraine organized a meeting at Variable titled Tea, Cake, Publishing and Digital Culture. The conversation was accompanied by a collection of books (from the legendary Whole Earth Catalog to the witty Dear Lulu) and we also had several e-readers to test the current functionalities of epub files. The latter aspect is a fundamental one to me, as I believe that a basic confidence with the formats and devices is needed in order to approach digital publishing. 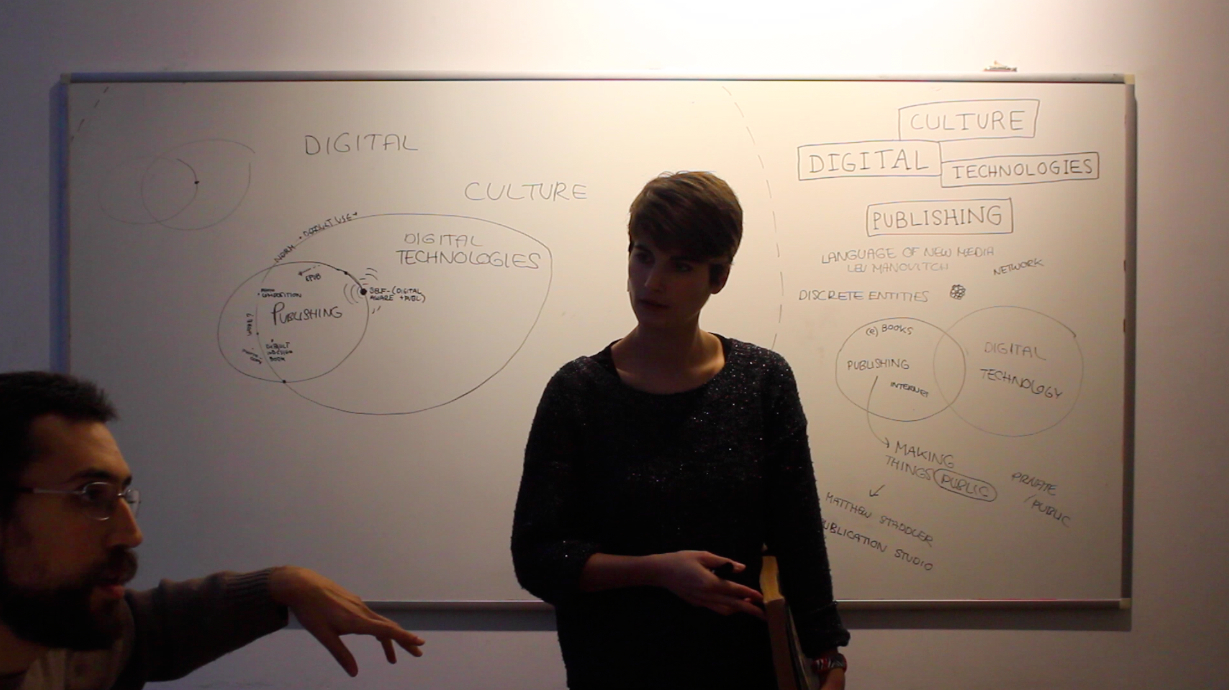 In an effort to build an overview of the publishing field and produce some tools to actually “read” the scenario, we collaboratively draw the above diagram (sorry for the misspell Lev!). Two aspects that emerged are particularly interesting to me:

I had a nice exchange of ideas with An Mertens, writer and member of Constant. We talked about the ongoing project The Death of the Authors, an initiative that promotes an active attitude toward creative works that enter the public domain. 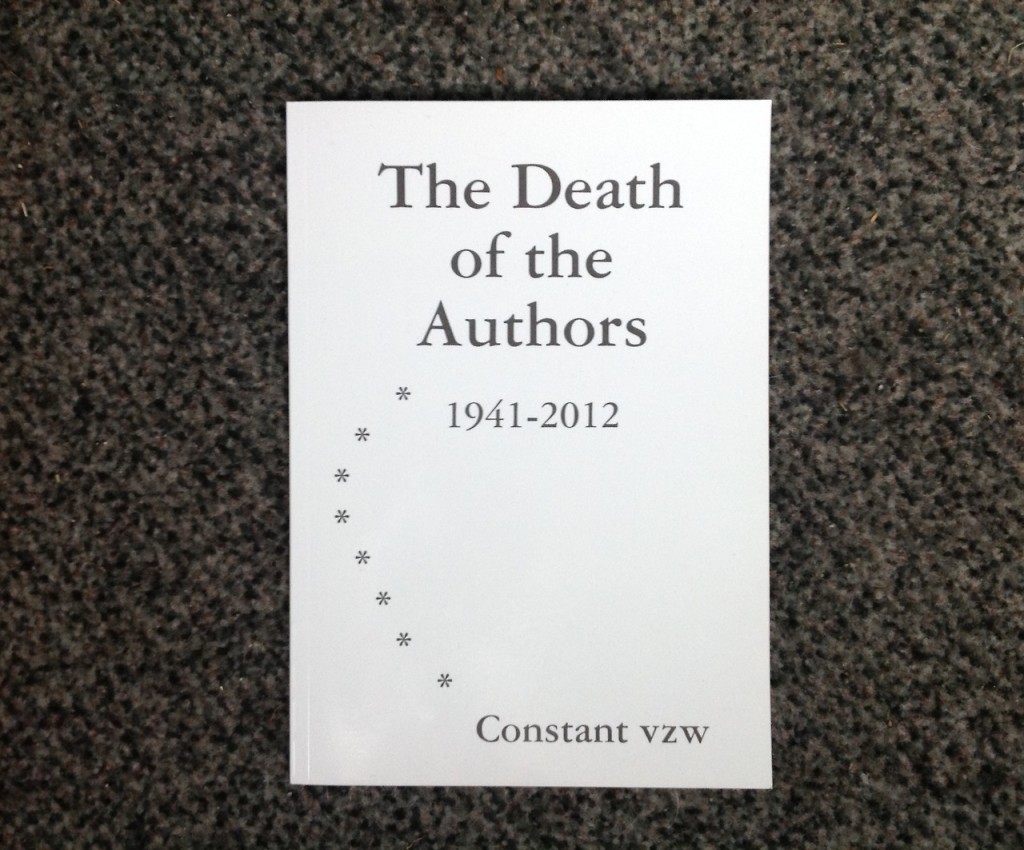 The Death of the Authors

Among other authors who died in 1941, Virginia Woolf and James Joyce entered in the public domain in 2012, 71 years after their death. Through an algorithm made with Python and nltk, the work of the authors is mixed according to several parameters, generating an endless number of mixes.

One of the most fascinating aspects of the project is the idea that the script metaphorically mimics the decomposition process of the bodies under the ground that become a single entity. This rather macabre metaphor gives insights on how to read book (or not to), as the source code can be seen a sort of manual to interpret the piece. Paradoxically, the generated text, becomes secondary to the dynamics of the script.

Going back to the main mission of the project, its strength is demonstrated by the fact that it can be repurposed in many ways, both in terms of input and output. In fact, Constant is preparing the 2013 edition of The Death of the Authors, including the work of a musician, a photographer and a writer.

At the time of writing, each visit of p-dpa.net/zotero produces a view on a different artwork that it is currently in my personal collection. The idea came out from a discussion with Eric Schrijver from OSP about Zotero, an open source software for managing references). Here’s the code I use.

I approached the development of the actual online archive (still in progress, I count to open it up in a week or so), interrogating myself on the metadata structure. The main need was to define complex relationships between diverse entities (such as creators, technologies, platforms). The definition of this model would represent the perspective (the personality maybe?) of the archive. Therefore I needed to:

Regarding the definition of the model, I was inspired by the methodology described by Richard Rinehart for the Rhizome ArtBase and the model employed in the Artists’ Books Online repository. I knew that I wanted to put the accent of both the technologies (e.g. nltk), the media (e.g. performance) and the platforms (e.g. Lulu) employed.

Both Michael Murtaugh and Eric Schrijver suggested RDFa, a way to build semantic relationships within HTML files in a fairly easy way. In doing so, vocabularies that are already developed for specific use can be employed, such as FOAF.

The nice thing of RDFa is that it’s platform-agnostic: no specific platform or framework is needed to implement it in the HTML pages. That said, the idea that derived was to take full advantage of WordPress in terms of usability and add RDFa into the posts. The code is already available.